We had an interesting conversation with someone who has been following our blog recently, in that she said you always have such an amazing time surely something must have gone wrong during your trip? Well, yes actually – it did 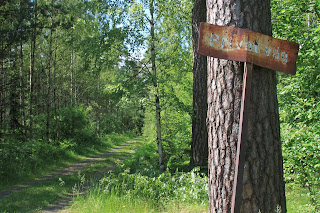 As a Navigator, Sophie usually does a good job – after all we’ve got three navigation aids mounted to the dashboard! However they don’t document cycle tracks particularly well and while in Norway we managed to head off down such a track narrowly passing between cafes and their outside seating arrangements while getting some bemused stares from the locals!

We actually broke down twice while we were away. The first time was in the South of France when the van alerted us to the fact that the oil was low. A quick inspection revealed that it wasn’t so much low as it was pouring out of the bottom of the engine! This fortunately happened literally outside of Fiat Professional agent who after an initial assessment of “catastrophic!” was later downgraded to a loose oil filter and a bill for £30. We blame the Romanian roads!

The later breakdown was in the worse possible place. Morocco. Or so we thought! When the van failed to start some drama ensued finding and bringing Mechanics back to the van only for them to twist two wires together and it start in a few seconds. Fuel cut off solenoid was the diagnosis.

We picked up a fine in Bergan while Wild Camping at the side of the road because we were “within 12 metres of a bus stop”. A fairly obscure offence but probably not to Norwegians! We didn’t pay the fine and we’ve not heard anything about it over a year later. 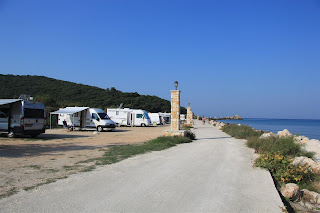 When Wild Camping in Greece we arrived at a beach near Parga where at least 15 others vans were present camping on the pier. We pulled off the road to check it out on foot to decide where we were going to park up. Easy enough, only we’d inadvertently pulled onto a particularly soft patch of sand and consequently got stuck up to our axels in the soft stuff. Bollocks! With help from two Germans and a Dutch, we eventually rock and push the van out of its rut.

We have a degree of bad luck when it comes to our chemical toilet and after a year of use it’s fair to say we have experienced much of what can go wrong with such a setup. The two incidents which stand out among others are when poor Sophie was having difficulty opening the trap after a Number 1. It turns out that the pressure had built up in the cassette after climbing over 1,000 metres into the Greek hills and when she eventually managed to open it the pressure blew the contents back into the van and all over unsuspecting Sophie. Fortunately our toilet is also in our shower room so a quick shower ensued and we both joked over how things could have been much worse if other “debris” had come into play!

The second incident was when our cassette indicated it was full with the red light illuminating on the tank. We continued on to our destination but unfortunately a mixture of an ill-fitting disposal lid and again altitude pressure resulted in the unit overflowing. Upon arriving at our destination we were greeted with, shall we say a large brown go-faster stripe down the side of the van where the contents had leaked out and dried while in motion. We feel sorry for anyone traveling behind us! We are now firmly of the belief that when the red light comes on, it’s already too late.

We usually fill two water containers before filling our fresh tanks, but on one occasion at Katakolo in Greece we didn’t. We had wondered why the cafes had refused to serve us tap water with our coffee and it transpired that the local water supply was a murky brown. Unfortunately we didn’t realise this until nearly 90 litres later, thank goodness for the drain down plug!

In Poland we noticed a nasty plastic taste in our on-board tanks, so bad that it actually felt like it was burning your mouth! We tried all sorts of flushing out and drops but couldn’t get to the route course. Two weeks later we discovered by accident that there was nothing wrong with our on-board tanks, but the high chlorine content of the water in Poland had reacted with our ridged hosepipe we were using for filling, which was contaminating the tank on every fill! 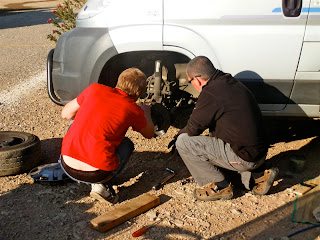 Upon arriving in Morocco our van promptly informed us that our brake pads were low. We found a brand spanking new Fiat dealership on the outskirts of Marrakesh where men in white overalls were unpacking diagnostic equipment and polishing their Snap-On tool chests. Brake pads were below them but the parts centre in Marrakesh did have them. After a couple of hair raising attempts we decided we’d manage – and manage we did for another 5,000 miles. Needless to say new discs and pads were fitted as soon as we got home!

Posted by Europe By Camper