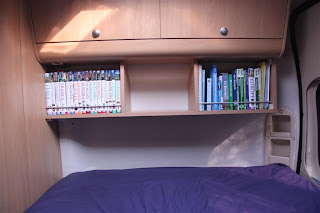 For us the main reason for buying the Twin was the fixed rear bed, our main use of the van is to drive and sleep so the fixed bed makes the task of "making up a bed" non-existent. However, we felt that the space at the bottom could be better ultilised and we wanted to be able to watch TV or more likely place a laptop at the end of the bed to watch. We also seem to carry with us in inordinate supply of travel books (did someone say Amazon Kindle?) so needed somewhere to store them. 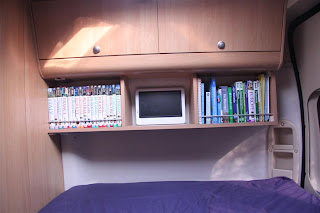 B&Q must have supplied Adria to start with, because their contiboard is the same colour as our twins interior! With the addition of a brushed aluminium dowel it made a perfect bookshelf with space for both our 10" Avtex and 13" Laptop. The wood is contoured to the shape of the rear wall and screwed together and from above and is very solid.
We added 1x 240v and 1x 12v sockets underneath for power and couldn't help put add a strip of remote controlled colour changing LED lights for a bit of fun! 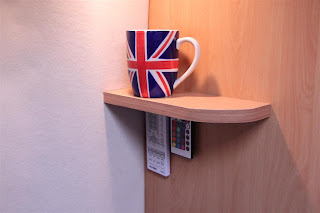 There is nowhere to put your brew in the bed of the Twin we found, so this little shelf is a perfect addition. Simply screwed and braced from inside the wardrobe it fits two cups with room for a couple of biscuits or a glass of water and mobile phones on a night (probably not the best combination!).

Underneath is stores the LED light remote control and the remote for the Avtex TV.

3.) Pop up worktop in the Kitchen Area 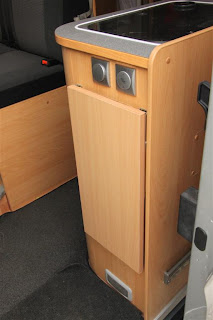 The newer Twins come equipt with a pull out worktop which when retracted is stored on top of the grill. This wasn't really an option for us and even so would probably not extend as far as we wanted it to.

With a bit of help from Rowley on the MHF forums we managed to find a suitable bracket rated upto 40KG. While eyewateringly expensive at £20 delivered for the pair there really wasn't any alterantive so we went ahead and purchased a pair of these brackets.

The brackets are fixed to the interior but also braced heavily from behind, we will make sure not to put undue weight towards the end of the shelf but it is a handy length for placing a wine glass in an evening!

While it does obscure the cubby holes its no hardship having to raise the table in order to access them.

Nice easy one, for reasons I've not yet fathomed the Twin doesn't come with a shower head holder, so we fitted on here. Part was £5 from Towsure @ the NEC.

The towel rail was just some brushed aluminium rail from B&Q and two wall mounted ends - total cost a couple of quid and allows for extra storage and privacy as it also doubles as a screen for the window.

In addition we also added a trigger shower head from Caravan Components in Hull which was just £5 and allows you to set the temperature and 'pause' the water while maintaining the same temperature on resume. 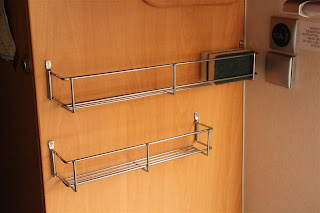 Nice and easy, couple of spice racks off eBay for £10 delivered, great for throwing bits and pieces in to save getting lost in cupboards and drawers 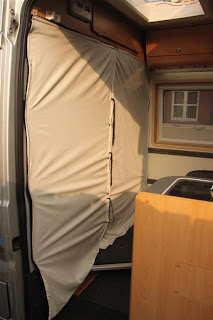 The perfect way to keep in warmth when wildcamping on a night - fleece lined curtains which Velcro across the whole cab entrance. Also allows the cab seats to remain forward facing and thus the van appears empty or at least less obvious then silver / remis blinds pulled across. We've also found they improve the efficiency of the cab air con since it is cooling a smaller space. Big thanks to Sophie's Mum for sewing them for us! We used a smaller piece of the same material under the bed instead of the wooden divide. You'll also notice we've recovered our seats - click here to see the article about the covers. 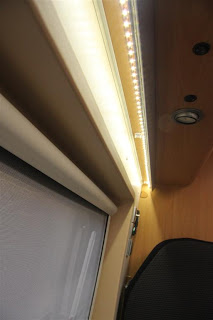 We've already wrote a post about LED lighting in our van, which cab new viewed by clicking this link. The only addition to which is a new home for our previously "too bright" 5050 LED strip - that is behind the curtain strip above the table. These are so bright that they light the whole van and use next to no power - meaning the roof mounted lights are now almost redundant! 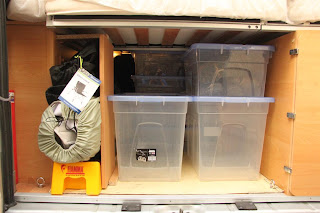 To me the use of the under bed area makes or breaks the twin. We tried many combinations before arriving at this one. 4 large stacking boxes are accessible from the rear, while 4 further smaller stacking boxes are accessible from inside the van meaning nearly all of the available area is used. A small divide allows for leveling blocks, fiamma screens and folding chairs to be stacked without impeding the removal of the boxes which slide out with ease.

10.) Increased Battery Capacity
We managed to fit 2x 86AH batteries into the compartment with no problems at all, increasing our capacity to 172AH. Coupled with our 2x 11kg Gaslow kit we shouldn't have any issues with heating or lighting! 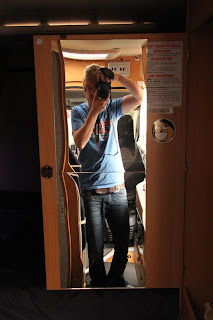 Sophie wanted a full length mirror, so we purchased 2x A3 perspex mirror sheets off eBay for under £10. Slight 'house of mirrors' effect where they join but for its use and the price I certainly won't be complaining! 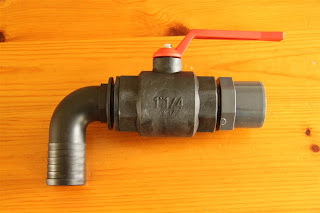 Bought from CAK tanks and will be fitted shortly, check back for an update! 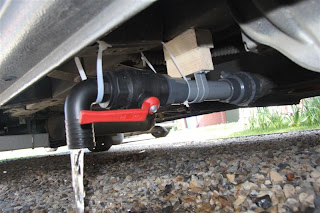 And here she is fitted. The cable ties are a temporary measure while I fabricate an L shaped bracket to support the front part of the drain, which is now flush with the valance and makes for much easier access and lining up of the van over a grate. The wooden support blocks, which are fixed to the chassis, will be painted black. Despite how it looks from the photo the pipe is totally level and drains effectively, the 40mm pipe fits into the existing waste tank attachment.

The parts were from CAK tanks: