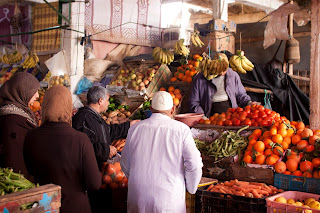 
With our time in the desert having come to an end we set off for Rissani in search of supplies. For us the journey back north signifies the long haul back to the UK for the summer and we're really not ready to leave this amazing country.

The bustling Souk (market) was in full swing and we left our vans at the side of the road with an official looking guardian who didn't want paying until we returned (70p). It wasn't long before we picked up an unofficial 'guide' appropriately wearing a union jack hoody and despite being told very firmly we weren't going to pay him he insisted he just wanted to practice his English. The Souk was vast and winding and when we eventually found the meat we were spoilt for choice with ten or so butchers hanging various cuts of meat, lamb and turkey for buyers to inspect and purchase.

Buying meat in Morocco is an assault on the senses and isn't really for people with a total detachment from the animal from which their food originates. There also aren’t the cuts of meat you are used to seeing as it is all taken straight from the carcass often hanging in the front of the stall or from small portions hacked off and placed on the front counter. As far as beef is concerned there are two main types; 'brochette' which assumes you are going to cook small tender pieces on a skewer or 'tagine' which is cheaper as it requires long, slow cooking to tenderise. The meat is usually only hours old and therefore hasn't had time to age so therefore steak can be a bit hit and miss.

The trick here is to always ask for the price per kilo before asking for your cut. We managed to buy 2KG of turkey breast sliced straight off the carcass for 140 Dirhams (£5 per kg) and 1kg of beef for 100 Dirhams (£7.50). You have to be in the right frame of mind to 'shop Moroccan'; it requires some quick and assertive decision making as to what bit of meat you want. Vegetable shopping is a much more relaxed affair where you pick up a bowl and help yourself. 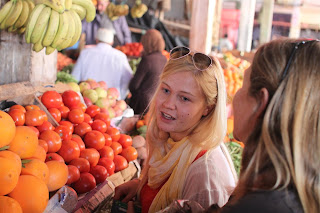 With all our supplies bought we considered lunch. There are many street food vendors, however on closer inspection much of the food had a closer relationship with the street itself then we would have liked so we opted for lunch in the van en-route to Blue Meski. The site was a bit of a strange affair with the river running through the middle and lots of people milling about with not a lot to do. From here we arranged a tour with Brahim for the next day for our drive to Azrou.

We picked up the French speaking guide and headed off to see the abandoned Kasbah which was accessed by crossing a short rubble field to pick up a deserted road. The Kasbah was abandoned in 1970’s when the dam was built allowing the valley to flood and making the Kasbah dangerous to inhabitants.  At the end of the Ziz Gorge we stopped for a tagine (goat we think) and to pay our guide who was to find his own way back to Azrou.

Crossing the lesser Atlas at 2,200m, enterprising Moroccans were set up at the side of the road renting out sledges to passers-by. We considered retrieving the body board and joining them to see if we could better our attempts at the Sahara Surfing but our bodies were not yet acclimatised to the near 30 degree drop in temperature from the desert.

It wasn't long before we encountered the Barbary macaque monkeys lined up at the side of the road being fed by passers-by, catching individual orange segments before inspecting and eating them.

We had two choices of campsite in Azrou: 'Euro Campings' which is the self-proclaimed best campsite in Morocco, next to a garish resort with gold Aladdin lamps outside that looked like it belongs at a Disney theme park, or a smaller understated campsite further up the road in a cherry tree orchard with nesting storks adorning the roof of the main house. It was a fantastic location, except for the slightly dodgy electric which left C&C, who are on gas rations, with a cold van as temperatures dropped to -7!
Posted by Europe By Camper
Labels: Morocco