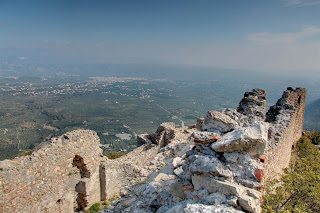 We sort of missed Mystras out when travelling from Nafplio to Inner Mani but given that it was only a 70 mile round trip from Kalamata we decided to go and see it even though it would mean coming back on ourselves. As it turned out, while deserted, the roads were some of the windiest we've driven on and I don't exaggerate when I say that my hands were sore by the end of the day.

The area around Mystras turned out to be one of the least camper friendly areas in Greece, owing to the number of campsites in the area most of the carparks went further than the usual "no camping" signs but specified no motor homes at all between 10pm - 8am. We did find a quiet lay-by not far from the main sights which provided a comfortable overnight given that the site closes at 3pm (GPS: 37.073686, 22.412860)

Mystras was a rewarding visit because unlike many of the other ancient sites we have visited it was a little more challenging to walk around and therefore more rewarding. The site is divided into two parts and we were advised on entry to visit the lower then drive up to the higher but we found the whole site fine for exploring on foot from the lower part with the exception of a colony of large red ants flying about one of the walkways!

On our return we missed out Kalamata totally which looked like any other large scale town and opted to spend the evening on an amazing sandy beach which stretched as far as the eye could see although we were the only ones present, this time choosing to ignore the 'No Camping' signs (GPS: 37.005560, 21.972500)

As we continue to travel around the coast we are constantly finding even more charming coastal towns such as Koroni which on the approach signs warned that vans and motorhomes were not allowed in the center but the parking provided on the outskirts was closed, so we tucked in on the road just behind the last sign.

The town itself was a maze of tiny streets and steps up to a large castle and church complex positioned imposingly on the hill.

Given that staying over night here is not possible, we moved on to the next village of Foinikounta where owing to the fact it was out of season and all the villas were closed up we were able to park right on the sea front outside the blue flag beach and wander freely around the sleepy town before it wakes up next season.