Our last week in Greece

Our days in Greece were running out and our pace slowed right down as the port of Patras became ever closer. We found ourselves parked in the cruise ship port town of Katakolo because the marina offered electric hookup to campers, Adam had some work to do and the batteries could use the free boost.

The town itself revolved solely around cruise ships, initially deserted as soon as a ship rolled in the shops would extend their wares well into the street. You could tell the nationality of the passengers that day by the greetings the shop keepers gave us as we walked down the street – “Bonjour!”, “Ciao!”, “Hola!” on three separate days. The shops themselves sold largely fake handbags, shoes and clothes, “Replicas!” replied one woman while I was commenting on the poor quality of one such item. Not quite sure how Greece gets away with it, maybe its something to do with the Faky Lacky.

As we got ready to leave we filled our water tank and as we moved onto filling our bottles the water revealed itself as a murky brown colour much to our horror and we suddenly knew why we had been refused water with our coffee. We lined up over a grill and let out 90 litres of off-white water and used the opportunity to give our fresh tank a good wipe out from the inside before filling up with fresh clear water from a nearby fuel station.

After a visit to Chlemoutsi castle a campsite beckoned to deal with the 4 weeks of washing, bedding and towels and we found Ionion Beach Camping was highly recommended. Aside from 5 German caravans and one motorhome the site was deserted so we picked the best spot right on the beach and proceeded to use all three large washing machines simultaneously, before stringing a line on the beach for some of the larger items to dry, the whole process which taking most of the day. 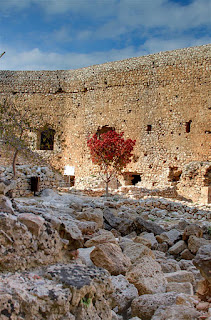 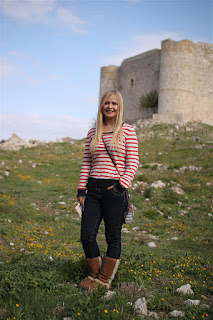 Just one more beach stop between us and Patras we managed a length of the beach before retreating inside from hordes of mosquitos, this is one aspect of Greece we won’t miss. The journey into Patras reminded us why we don’t like large cities, ports especially, as the roads were lined with immigrants looking to find their way under a lorry or passing vehicle.


We pulled into the new south port and Sophie checked the prices online while Adam went into the ticket office armed with a pad to get prices from the three different carriers. The process is straight forward and it’s an ideal opportunity to pitch one against another, except in our case Minoan was already cheapest by £100. While the ‘Camp On-board’ service finishes on 31st October the price remains the same but you are offered a cabin and a free meal instead, we managed to knock the price down to £215 which for a 23 hour crossing didn't seem too bad; a return would have been only £300.

After the most thorough search we’ve ever had by the Greek army who guard the port, we boarded and were greeted to the usual frantic Greek arm waving and eventually slotted into a tiny space under a ramp and plugged into the on-board hookup with just one other camper; our batteries won’t know what’s hit them.
The ship itself was largely deserted and on-board prices inflated to all but the truckers with their 50% discount cards, our free meal was limited and we settled on meatballs while the truckers opted for three main courses each. I can’t imagine a cruise being relaxing because when we arrived to a grey Ancona we were truly knackered and ready to be back in control of our own destiny.
Posted by Europe By Camper
Labels: Greece