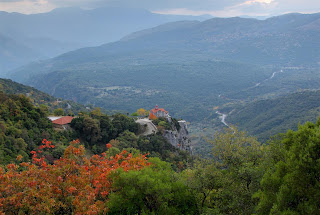 We have seen some of the most impressive beaches in Greece, Voidokilia included, however with the weather turning a little colder we decided to head inland to view the magnificent Lousios Gorge. The route was adorned with charming villages perched on impossible slopes and we managed to stay almost in the center of three and nobody batted an eyelid, such is the laid back culture of Greece.

Our first stop was Karytaina where we stayed in the town square and made the short journey up to the ruined castle which overlooked the village. Having drunk our staple Greek coffee we departed to explore some of the Gorge area which as it transpired was accessible by road starting at Elliniko. We've been a little wary of minor roads in Greece and with good reason!

While generally good in some parts the road was down to half width with the other half having disappeared down into the gorge while a bust pipe cut another road in two.

We were flagged down by two Polish walkers at Kokkoras Bridge who had walked the length of the gorge but hadn't left enough time in which to return along its length. 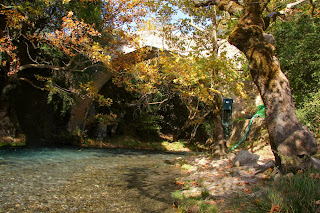 Fortunate for them we were there since we didn't see another car for the whole day, we gave them a ride to Prodromou Monastery saving them a couple of km's and a 600m climb. Wedged into a palisade on the canyons east flank, the 12th century monastery is the gorges most spectacular sight - although we must have arrived on wash day as grey underpants were flapping in the wind from every balcony and the monastery itself was closed.

Two further nights were spent in the village of Dimitsana which offered ample parking, free wifi and good opportunities for hiking into the gorge. Adam was keen to visit the Museum of Hydroelectricity which was unfortunately closed, much to Sophie's relief.

The trip through the Gorge finished at Olympia which was totally deserted except for 4 4x4's which had traveled overland from China apparently en-route to France. The Olympic games were first held here roughly around 776 BC and was originally a grand venue, more of a temple than a sporting site. Today, there are only a handful of columns and ruins which exist such as the circular Phillippeion dating back to 4th Century BC and the Temple of Hera which is one of the oldest temples in Greece.

It was one of the rare occasions when it might have been nice to have a guide since, while impressive in terms of scale and historical significance, the fact that we had the place to ourselves detracted from the sites sense of importance. A worthwhile experience, but perhaps we've just had our fill of ruins for this trip?

Just a couple of other photos which we took whilst travelling through the little villages of the Louisos Gorge.