To give you an idea just how quiet Greece is at the moment, a whole film crew can set up in a town such as Methoni and nobody bats an eyelid or gets in the way. Nobody apart from us of course, shamefully ordered down from he castle walls citing that we were "too modern" to be in shot! Oops.

Next stop was Pylos, I'm not going to tell you how it was quiet (it was) or that the whole town centered around a large roundabout with a in-season seating capacity of several hundred but for now home to just seven Greek men aged 65-105. We once again contravined the 'no camping' sign on the pier given that we're not driving a tent as pictured on the sign and were joined by the two other vans which have been following us round for seemingly weeks now.

Adam managed to pick up several cases of Mythos beer with the €1 discount promotion which seemed to have sold out everywhere weeks ago and we made use of the towns three bakeries, butchers, fishmongers and vegetable stall. He also managed to get a hair cut from a traditional Greek barber which included the obligatory slicked back gel - he couldn't wait to get back to the van to wash it off! Greek coffee for €1 a cup has also become an afternoon ritual for us and boy does your body soon remind you it's time for the next one. In season it is possible to rent a boat to get to some of the islands but we had to make do with a couple of impressive sunsets over them instead. 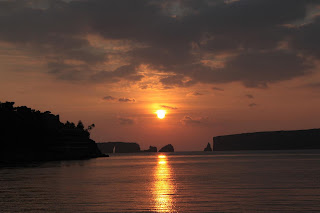 We wandered up and down trying to decide which restaurant to eat in given that every single one was empty but all appeared to still be serving food, we settled for the one we had warmed to earlier in the day with the Greek Maitre d who seemingly spoke English with a Yorkshire twang. We sat down on our own and as we ordered our drinks a young lad appeared at the door out of breath and disappeared into the back and re-appeared in a set of chefs whites, clearly summoned from home (or more likely a nearby boozer!) to cook for the only two patrons of the evening. We opted for the mixed Greek grill and after much banging and crashing from the kitchen we were tucking into a mouth watering plate piled high with various grilled meats and nearly had to be carried back to the van. The next morning we took advantage of the facilities to fill our fresh tanks and felt no remorse in emptying our toilet cassette in by far the worst public convenience so far of the trip.

We'd heard about the castle, dunes and famous curved beach of Voidokilia and set about trying to find it which was a little more difficult then we anticipated as access from the South isn't possible and you have to cut across inland through a couple of wing mirror-scraping villages before you arrive. It really is a sight to behold and we had the place to ourselves as usual, I can't imagine how busy it gets in season. We made the steep mosquito infested walk to the Castle and were rewarded with views overlooking the cove and nearby lagoons and contemplated a jump in the sea but the water was freezing so perhaps we've already had our last dip of the season.