3 countries, 900 miles, 3 days. This time the method of transport was not a campervan, but a Smart Car!

To many motorhomers, a Smart Car is simply a conveniently small vehicle to tow behind your motorhome, but if you look a bit closer there is a lot more to them then that.

Sophie, who works for Smart of York, won a competition (as she sold a Smart eBike) to attend the Smart Times festival held this year in Antwerp so we duly attended. Being bank holiday weekend the Hull to Zeebrugge ferry was astronomical and thus the only option available to us was to drive down to Dover and back again a total distance of nearly 900 miles. Even then the ferry was still nearly £200 return, although thankfully this was reimbursed as part of the prize. We set off late on Thursday ready to take on the challenge and stayed at a hotel near Dover before catching the early crossing.

It was so good to be back driving in Europe where they understand lane discipline and have a good road network, it seems everything just "works" on the continent and we really do miss it. One thing we don't miss at all is staying in hotel rooms. You never know what you're going to find behind that key carded door and living out of a suitcase just doesn't appeal to us in the slightest!

Smart Times itself was a real eye opener into the weird and wonderful world of Smart cars and their enthusiastic owners. With hundreds of Smart Cars in attendance from all over Europe, including a good number of the impressive limited edition Smart Crossblades as well as impressive customised and individual cars. The brand has really captivated people's imagination and individuality and the Smart Times is Smarts way of saying thank you by putting on a free event, with free entertainment and food available to all participants. 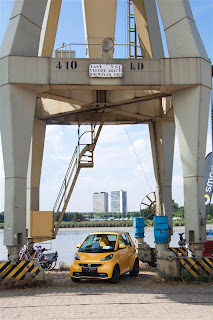 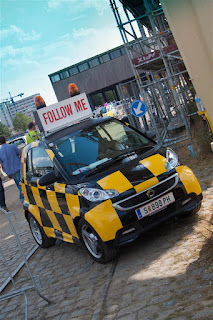 We were even able to test drive the latest Smart Electric Drive on the streets of Antwerp, the acceleration on this latest generation of the car is simply startling and is sure to be a winner when it is released next year.

Adam has never driven a Smart car any real distance but was impressed with their power and handling especially on the motorway. We even managed 55mpg over 270 miles at a cruising speed of 80mph with a boot full of wine - we had more wine in the boot then the fuel tank held (it's 33 litre tank before you ask!).

The Smart Parade and lining up all the cars to say SMART was pretty spectacular too!