A+ A-
Print Email
I've been experimenting with LED light strips from eBay, these are about £6 for 1m lengths, with great success.

The problem in our van is there are lots of dark spots as the factory fitted roof mounted LED's aren't that bright as they use the older style diode LED's. These were no doubt cutting edge when the van was designed in 2006 but are nothing in comparison to the 12v halogen units they were meant to be replacing.

I've also gone down the route of replacing some of the spot lights / bathroom lights with the latest 5050 type SMD G4 (two pin) LED's. They do the job and are super bright but again don't match up to the sort of lighting effect I wanted to create in our van. They are very cheap though, at about £1 a bulb straight from China!

So I started looking at LED strips for sale on eBay. The LED strips have come about because of the SMD (surface mounted) LED's which are forming to basis for LED technology moving forward.

When buying an LED strip you need to consider three variables:

2.) Colour Temperature
The main two colour temperature's you will find are described as "warm white" which is found at around 3000 kelvin right the way to cool white usually found somewhere around 4000 kelvin. "Daylight" is actually found nearer 6000 kelvin. However, halogen bulbs are much closer to the "warm white" level of the colour spectrum  so it is likely that this colour temperature will appeal the most.

3.) Waterproof
You can also purchase these LED strips which have a waterproof covering, these are ideal if you want to use them on the outside of your van such as an awning light. They are so thin you could easily run them down the inside of your Fiamma awning. 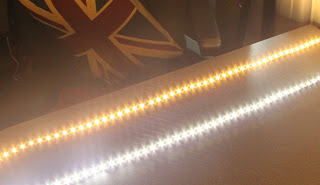 The picture to the left shows two different LED strips. It's actually pretty hard to photograph them, they are so bright. The strip on the left is a 'Warm White' 1210 strip and the one on the right is a 'Cool White' 5050 strip which is considerably brighter - although it doesn't show that well on the photo. In fact, to see how bright they are just see what they look like compared to my van's headlights - no way could you use them as daylight running lamps! Click here for photo

The beauty of these strips is that you don't need any additional hardware to fit them, they are self adhesive so can just be pealed off and stuck. They can but cut with a pair of scissors at 3 LED intervals and rejoined or re soldered with connections for a few pence from eBay - great if you want a continuous loop around the van under cabinates, for example. 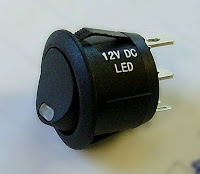 One word of warning, however. The LED's must be fitted in a location where you can't catch the light straight on - such as behind a rail or under a work surface or similar. They are so incredibly bright and if you stared into one for too long I have no doubt you might damage your sight!

I've fitted them in three locations in my van - controlled by a very simple 12v flick switch - the same as what Adria uses for it's down lighters. The switch is available with or without an LED tell tale light.

Now I've used these in my van hooked up direct to the 12v power source which, on mains hookup, runs at about 13.5v without issue. However, you may want to fit an inexpensive voltage regulator into the circuit - I have added one of these to the link section below.

The Cab
It strikes me as a bit odd that Adria didn't put any lights in the cab, since the main seating area in the Twin are the two cab seats where it's impossible to read as standard. The LED strip fits perfectly behind the join between habitation and cab area.

Under The Interior Step
The switch for this light is located near the door, so you can see what you're doing to take your shoes off and also give some welcome light into what was a dingy dark area near the sliding door.

Under the Fixed Bed
This was a really dark spot, especially when stood in that area, the strip really helps to bring a sense of warmth into the van. 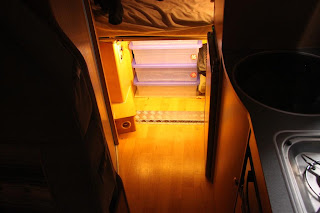 Something a bit special... 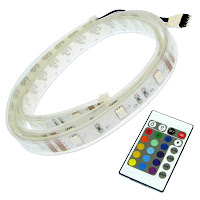 I couldn't resist but order for £10 delivered some remote controlled, colour changing LED from China for in the bed area! It's not arrived yet, but when it does I'll update this entry! Link to Product on eBay


Links to Products
LED Light Depot on eBay have given me unbeatable service on their 1m 3258 LED strips - delivered within 48hrs on the two orders I've placed with them. Their 1m strips are £6.75 delivered and 2m strips are £12.99 delivered and come with wires already attached. Additional hardware is only required for cutting and rejoining them should you wish to do so: