A+ A-
Print Email
One of the things we have always struggled with is cab radio reception. It was something I thought was fairly unique to our Fiat Ducato based motorhomes, but is something our Renault Master suffered from also - with its wing mounted FM antenna. I've tried various windscreen antennas in the past with varying degrees of success but ultimately, nothing beats a proper roof mounted antenna - which is what the base vehicle would have most likely had been a commercial van.

While running cables for our solar install I decided that I was going to have a go at installing an inexpensive active FM antenna on the roof. This bypassed the need to drill the bodywork and got the antenna to the highest point. 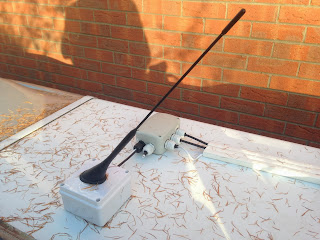 ~ Sikafix 512 left over from Solar Install

The antenna is an active antenna, which means it requires power. It would usually only require a positive feed as it is grounded by the chassis on a car - but in this situation you will need to run an earth feed also. The cables were run to the back of the radio and the positive feed taken from the ignition feed (red) from the back of the radio. This means you wouldn't benefit from the enhanced signal when the ignition wasn't on, but usually for us reception is fine when stationary.

The IP65 box isn't the most aerodynamic - but I needed one with a flat top for the antenna and wanted one with a screw down top that was removable. In reality I can't see that it matters a great deal as the Sikaflex is incredibly strong.

Once installed the results were better than expected. I was a bit skeptical about the benefit of the powered element, but removing and replacing the 5A fuse made a noticeable difference in the sound quality.

Looking forward to testing it out on the road and seeing how it performs longer term.
Posted by Europe By Camper
Labels: Electrical, Essential Guide, Van Mods