Our two week mini tour, we're so not ready!

A+ A-
Print Email
For two weeks only, EuropeByCamper will be back on the road. Destination still to be confirmed, but our method of getting to Europe on this trip won’t be the conventional one for motorhomers.
Dover? Tunnel? Nope. We’re going Harwich to the Hook of Holland!

One of the perks of having a travel blog is that on occasions you get approached by third parties who offer their products or services in exchange for a (hopefully favourable) write up. We were approached by Stenna Line earlier in the year who asked us if we’d like to travel on the Harwich to Hook of Holland crossing. This is something we hadn't considered previously, but given our northern location it has clear benefits. Usually, by the time we’ve driven almost 300 miles to Dover, the thought of then driving through France for a further 1-200 miles doesn't really appeal and so we end up sleeping near the terminal in Calais.

What we think we’ll like about Stenna Line is that we rock up in Harwich at 9pm, hopefully board fairly quickly and then make our way straight to the restaurant. Relax on-board for a few hours, before retiring to our cabin where I am told there is a good chance of there being a Mini Bar, which may or may not add bias to our review! Departing fresh into The Netherlands means we should be ready to tackle 4-500 miles of Germanys finest Autobahns and hopefully arrive at our destination in early evening. It’s all sounding good so far. 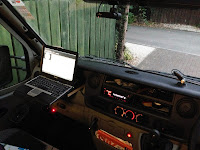 We’ll be taking with us lots of new things to try, one of those is a collapsible table Argos have sent  us to review from their new camping section and also our Cadac Safari Chef. Phil at Rhino Installs was too busy to fit us a Gas BBQ point before we left (although, I did only ask him on Saturday!) and so we’ll be using little gas bottles until we get back. Somehow we've managed to find time to fit our laptop based dashboard dock into the new van and we'll be using a combination of Autoroute 2013 and Garmin nRoute using OpenMaps offline downloads to navigate, plus a GPS tracker for those who worry too much back home. I must do a video about this soon!

We'll also be posting lots of updates via Instagram, which coupled with its new 15 second video recording could make for some interesting sneek previews between blog posts but you can also catch up with us on Facebook.

The remainder of equipment on test will be some of our own products from Motorhome WiFi which are in their final testing stages and will be ready to launch upon our return. If we can’t stay connected, nobody can!

Going on holiday when you run your own non-digital business is certainly daunting. We’ve set two dispatch dates on our website and promised ourselves we won’t be glued to our e-mails, but instead ‘check-in’ to them every day or so. Only time will tell how customers react to this but hopefully they’ll understand that we all need a break sometimes.

We get back and then head straight off to the Malvern Motorhome Show which is promising to be a good one if last year is anything to go by. If you've not been to such an event before, I’d recommend going as this one is by far the most fun and there is bound to be lots of motorhome accessories and parts on offer.

Its all a bit of a blur at the moment and I don't mind saying that we're not really looking forward to it at the moment, but I'm sure once we hit the road everything will fall into place. Watch this space!
Posted by Europe By Camper
Labels: Preparation
Location: York, UK