Farewell to Microsoft Autoroute - Discontinued in 2015

A+ A-
Print Email
If you are familiar with our blog, you'll know Microsoft Autoroute features heavily in our route planning and navigation. For every mile of the 23,044 miles we drove during our 12 month tour we had a laptop mounted on our dashboard plotting our position and the location of nearby points of interest and overnight stopovers.

Last year I spent the best part of a day compiling and formatting a data set in Microsoft Excel for use with Autoroute. Over 130,000 lines of information were formatted as hyperlinks to take you direct to where the information was displayed online from several sources. It has been downloaded more than 10,000 times - so at least I know I'm not alone. If you were one of them - please complete the poll at the bottom of this blog post and let me know if you'd download a 2015 version.

However on the 31st December 2014 you will no longer be able to buy Microsoft Autoroute via the online Microsoft Store. It also seems that all of the CD copies have dried up too and so if you want it you need to act fast, buy online and once downloaded ensure you backup the installation files as I'm not sure you'll be able to access them again. The US equivalent, 'Streets and Trips' which has also been embraced by the American RV are also mourning their loss.

An extract from the official statement (which also covers Map Point / Streets and Trips - Autoroute by other names) reads:

"The success of these products would never had happened were it not for the loyal and supportive fans who purchased the product and its various iterations over the years,” shares Larry Petersen, test lead for Microsoft Streets & Trips. “Speaking at RV rallies over the years, I’ve loved hearing about our avid customers’ experiences using the software to plan and enjoy road trips across North America. The feedback and enthusiasm from our users have helped make Microsoft travel planning software a leading solution for nearly twenty years.”

We so appreciate the support of our dedicated users over the years. It was a tough decision to discontinue Microsoft’s favorite mapping software products. The retirement of these products will not affect software already installed. Current users may continue to use Microsoft AutoRoute, Microsoft Streets & Trips and Microsoft MapPoint to plan their travel adventures and will have online support until at least July 2015."

If you've never used Autoroute you'll be wondering what the fuss is about. It doesn't work on iPads/Tablets or phones or even Mac computers. If you want to use it for navigation you have to buy an external USB GPS dongle. If it was purely navigation you are after then I concede that there are better devices or software available to perform that task.

However if you want to handle a lot of POI (Point of Interest) data from several sources in a single screen and have full control over those data sets there isn't really a piece of software which can deliver this in the same way. I've always said that a 'Sat Nav' is great at telling you where you are going - but not so great at telling you where you are in relation to points of interest and I don't like the way in which high volume data is formatted and displayed on these devices. In addition, how many times has your TomTom or Garmin deviated you off a main road just to 'cut off a corner'? Having a secondary map view means we have been able to avoid this. It also means that the passenger doesn't have to mentally plot their position on a paper map - their exact position is displayed on screen. 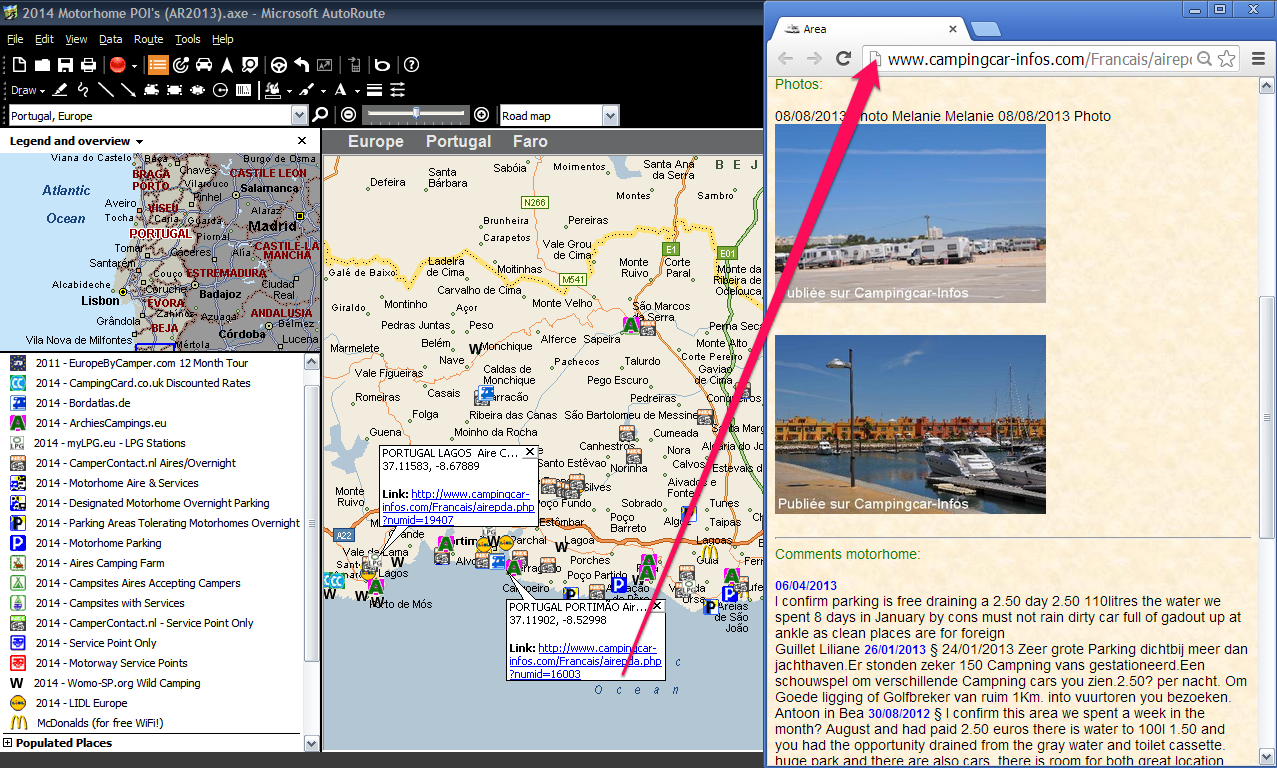 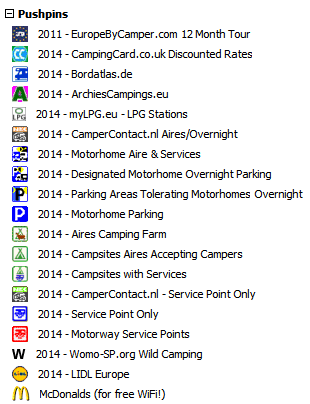 Take the way we travel for example, last year we drove to Slovenia which means a circa 900 mile drive. We drive as far as we can in a day and the distance is governed by weather, traffic and so forth and so forward planning is a bit pointless. In addition there isn't a great deal for a passenger and so it's a better use of time to plan while on the move. I'll probably turn to Sophie and say "I'd like to stop in the next 30 minutes" and instantly we can see the list of stopovers pooled from Camping Car Infos, Camper Contact and Bordatlas - plus where we have stayed before. If we have an Internet connection (which we always do, of course!) we can then click through to the relative websites and view pictures and reviews and make an informed decision on where to stay.

The above would be fairly tricky (although not impossible) by any other means.

The sad truth is this software has been a part of my life for almost 15 years. My father had it on his work computer and I was fascinated by zooming into places and seeing such detail and points of interest. In my earlier career as a sales rep it was invaluable to help to plan my call file and when we started to explore Europe, it became an important part of our 'on the fly' navigation strategy.

The availability of mobile data is perhaps one of the reasons why Autoroute has met its demise. The need for a 2GB offline map is not as essential as it once was and hopefully from the end of 2015 when the EU brings an end to roaming charges you should be able to use Google Maps (or Bing as Microsoft would prefer) anywhere in Europe without worrying about the cost of the data it uses.

So until then, what are the alternatives?

Open Street Maps is a fantastic resource with detail and built in POI's which far exceed that of Microsoft Autoroute in its 2GB full Europe package. However in order to download the Map Tiles and route them offline you need a piece of software which is also discontinued - Garmin nRoute. We covered some information about this when we were in Morocco (which Microsoft Autoroute doesn't cover) and it worked really well. Where it falls down is the import of third party data sets.

I for one will be using Microsoft Autoroute for many years to come - we actually run Garmin nRoute with Open Maps alongside Microsoft Autoroute as nRoute is better as a 'navigation' but for POI data I'm not sure I'm comfortable with any other method. I will of course try and let you know the outcome.

I don't want to sit here and implore you to download a soon to be obsolete Microsoft product or that you join me in mourning its passing. But consider if upgrading is something you will consider or perhaps try the free trial below and see if you think it will help with your navigation.

To download a free 14 day trial you can still do so here until the end of the month:
http://www.microsoft.com/en-gb/autoroute/free-trial.aspx

To download our POI data set containing 130,000 locations you can do so here:
http://www.europebycamper.com/2013/12/2014-autoroute-motorhome-aire-campsite.html

If you think you want to buy the software while you still can, the price is £33:
http://www.microsoftstore.com/store/msuk/en_GB/pdp/AutoRoute-2013/productID.278710300
(if you use Quidco, you can get 15% cashback: http://www.quidco.com/microsoft-store/)

Before I sign off, I have just one question for you.
Should we publish a 2015 data set for Microsoft Autoroute now the software is obsolete?
Posted by Europe By Camper